Greece is the south - eastern border of EE, a country with a mild climate, a wide coastline, innumerable picturesque islands and a rich historical and archaeological heritage with worldwide recognition. Currently recovering from a long period of financial crisis, Greece follows steadily the path of progress, boasting for the challenges it can offer to jobseekers and potential entrepreneurs from abroad, as well as a qualified national workforce that would be able to thrive both in and out of the national borders. The key words are: hospitality, hard work and passion for innovation.

A high percentage of unemployed persons appear to have worked in the past in businesses involved in wholesale and retail trade, repair of motor vehicles and motorcycles, processing and accommodation and food service activities. Moreover, economic collapse dealt a severe blow to occupations linked to the construction sector. As a result, the occupations that have suffered most are those employing unskilled workers, technologists and technicians. The high number of businesses that have folded due to the severe, nine-year-long crisis has made a lot of people redundant. Office workers and personal services workers (hairdressers, cooks, waiters, etc.), shop sales staff, domestic workers and cleaners are all occupations that have suffered, not to mention the artistic professions in general and the humanitarian sciences.

There are more unemployed women in the above occupations than unemployed men.

After the long economic recession, during the last years, the climate seems to be changing positively, as the unemployment rates have significantly dropped. In combination to other relevant rates within the labour market, this fact indicates a gradual and steady improvement.

In March 2020 the unemployment rate further dropped to 14,40 %, but still remains the highest in EU. The outbreak of the coronavirus pandemic will have a significant impact on the labour market, although its extent cannot be assessed for the time being, keeping in mind that the upcoming turbulences will affect the labour market and the economic indicators and rates on a global basis.

According to the statistical data of the last quarter of 2019, it is important to note that the highest rate of unemployment is to be found among those who have never attended school or have not been able to conclude the primary education and the lowest rates are to be found among those who have a university or superior technological college degree. As far the age is concerned, the rate of unemployment is in inverse proportion and the highest rate os to be found with young people, aged 15 - 19 y.o.

According to national registered vacancies data, the highest demand is for workers in wholesale and retail trade, provision of services (especially customer service and technical support), office workers, repair of motor vehicles and motorcycles and last, but not least, accommodation and food service activities in the tourism sector, especially during the summer period. It is important to mention that job vacancies dealing with processing, transport and storage (logistics) and professional, scientific and technical activities are experiencing growth. According to data from the Hellenic Statistical Authority, there were 14.343 job vacancies throughout Greece in the second quarter of 2019.

In contrast with other EU countries, most employment is full time despite the statutory introduction of flexible forms of employment. Part-time workers account for 9.5% of total employment. The percentage of salaried employees, which is estimated at 68.2 %, is still lower than the EU average. .

According to the 2011 census, the population of Greece is approximately 10.8 million. It is estimated that there were over one million foreign immigrants working in Greece before the crisis. However, after a few years foreign workers and their families started to leave due to the slump in the labour market and in particular in the building industry. The latest official figures show that over the five-year recession (2009-2013), 33% of jobs held by foreigners were lost. According to recent ELSTAT figures, there are 708 054 immigrants residing legally in Greece, 75-80% of whom are believed to be economically active.

Furthermore, during the last few years Greece has been particularly hard hit by the refugee crisis due to its geographical situation on the route most frequently used by refugees. This places a heavy burden on the Greek economy and adversely affects tourism on the Greek islands. According to press reports, more than 4 million migrants entered Greece illegally during the peak years of the refuge crisis, although most of them quickly moved on to other EU countries.

Immigration legislation, as codified by Law 4251/2014, lays down the conditions for employing foreign workers lawfully and protects their employment and insurance rights. The objective is to integrate migrants into the labour force smoothly on the basis of lawful employment and to open up positive prospects both for them and for the Greek economy, and Greek society in general.

Labour mobility in Greece is limited compared to other European countries. This is due to the exceptionally high rate of home ownership (80%) and to social and cultural factors in which immediate and wider family connections play an important role and constitute an informal but exceptionally strong network of social protection. It is also due to the fact that the unemployment rate is higher among foreigners living in Greece than among Greek nationals. Ηowever, the foreign nationals are economically active at a higher rate, in comparison to Greek nationals.

Most businesses (over 80%) are small in terms of turnover (up to EUR 150 000). The figure for the average number of jobs provided per business also points to the predominance of small businesses: over 85% of businesses have no more than five employees.

Ιndicative Job offers in the event "READY TO GO ON - PRONTI A RIPARTITE 2020":

PROVISION OF SERVICES (with emphasis to language skills) 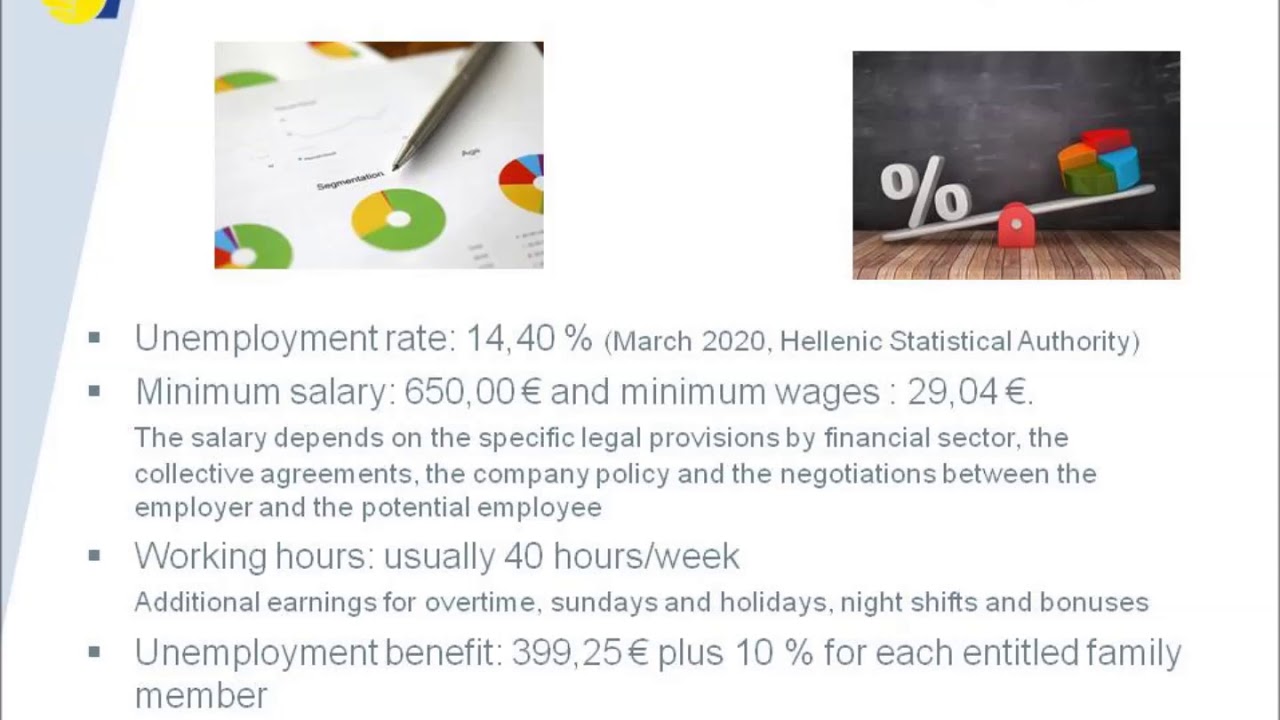